In Mexico, Indigenous recipes are preserving tradition, native seeds and sense of place

UPDATE – the below story was the feature of a min-documentary by German news channel Deutsche Welle. Click here to watch

In southern Mexico, words like chipilín (a leafy green), chayote (mirliton squash), yerba santa (sacred herbs), and maize (corn) used to convey poverty. But for the 200 women of the Cárdenas community within Chiapas state’s Cintalapa municipality, they now conjure feelings of pride.

These fruits and herbs, endemic to southern Mexico, have historically formed an essential part of traditional diets in the small farming village. Growing and eating these traditional foods cultivated in their backyards had become undesirable, recognized among locals as merely a “poor person’s access to food.” But an Indigenous cookbook is changing the women’s beliefs and perceptions about what it means to embrace and preserve their culinary heritage.

“I am 93 years old. Sharing my recipe is the most beautiful thing that has happened to me,” says Consuelo Santos Cruz.

The cookbook, Recetario Colonia Agrícola General Lázaro Cárdenas (Recipe Book for the Cárdenas community), was published in mid-2019 and comprises 48 recipes, each submitted by a community member. Created by and for the community, the first-of-its-kind cookbook serves many purposes.

It’s a resource that promotes traditional and typical cooking methods, ingredients, and dishes — recipes that had been in their families for many generations but weren’t being passed down to younger generations.

It’s a physical manifestation of pride in cultural heritage, with each recipe naming its author and spotlighting Indigenous crops.

And it’s a visual tool that normalizes the use of agroecology and native seeds within the community and has started a dialogue among smallholder farmers around using more sustainable agricultural practices.

“Chipilín mole is traditional in our town. I felt proud to see it in the recipe book. I felt just like a professional chef,” says Aurora Gálvez Cruz.

The cookbook was the brainchild of the Mexican nonprofit Desarollo Alternativo e Investigación A.C. (DAI). DAI’s mission is to improve the lives and the soil of Indigenous and non-Indigenous people in Chiapas state by promoting traditional agricultural systems, crop diversification, agroecology, and native seeds. Maintaining the ubiquity of traditional knowledge is also a pillar of DAI, which sees it as a cornerstone for rural development, gender equity, bio-cultural diversity conservation, and the sustainable management of agroecosystems.

For example, DAI Executive Director Kevin Ferrara, who won the Food Security & Nutrition Impact award from Rare’s 2017 Solution Search: Farming for Biodiversity competition, encourages farmers from Cárdenas to increase the use of milpa — a mixed crop of maize, beans, and squash — in home gardens. This approach has resulted in better family incomes, food security, and food sovereignty for farming communities across Chiapas.

“The smallholder farmers often have only one hectare to come up with good strategies to fulfill household needs,” says Ferrara. “There is massive potential in the local and traditional knowledge systems, such as backyard production, that we can use to tackle these challenges.”

Local and Indigenous knowledge systems provide a foundation for locally appropriate sustainable development and can improve access to local food and livelihood security in areas composed mainly of smallholder farms, such as Cárdenas. Both the U.N. Food and Agriculture Organization (FAO) and the 2019 IPBES Global Assessment Report on Biodiversity and Ecosystem Services recognize that Indigenous communities play a fundamental role in safeguarding biodiversity, enhancing food security, fighting poverty and hunger and promoting sustainable agriculture practices. Agroecology itself directly contributes to some of the most significant Sustainable Development Goals.

Armed with these new insights, Kevin formed a campaign to inspire pride among Cárdenas’s farmers about native seeds in their backyards and elevate women’s roles as champions and heroes of native seed cultivation. DAI has now printed 65 cookbooks for the community and has fielded requests to publicize and share the cookbook in San Cristobal de las Casas, one of the biggest cities in Chiapas. The women are already planning a second cookbook with new recipes to share.

For Kevin, watching the cookbook stimulate pride in local and Indigenous agriculture has motivated him to focus future campaigns on inspiring pride in traditional seeds and farming techniques and spreading domestic demand for these seeds and techniques across Mexico. DAI is advancing new campaigns in four communities, engaging 634 farm households in agroecology and seed dissemination, and training local youth to support farm households.

“We are committed to continuing to elevate the importance and cultural richness of products generated by the communities and keeping traditional knowledge alive,” says Ferrara. 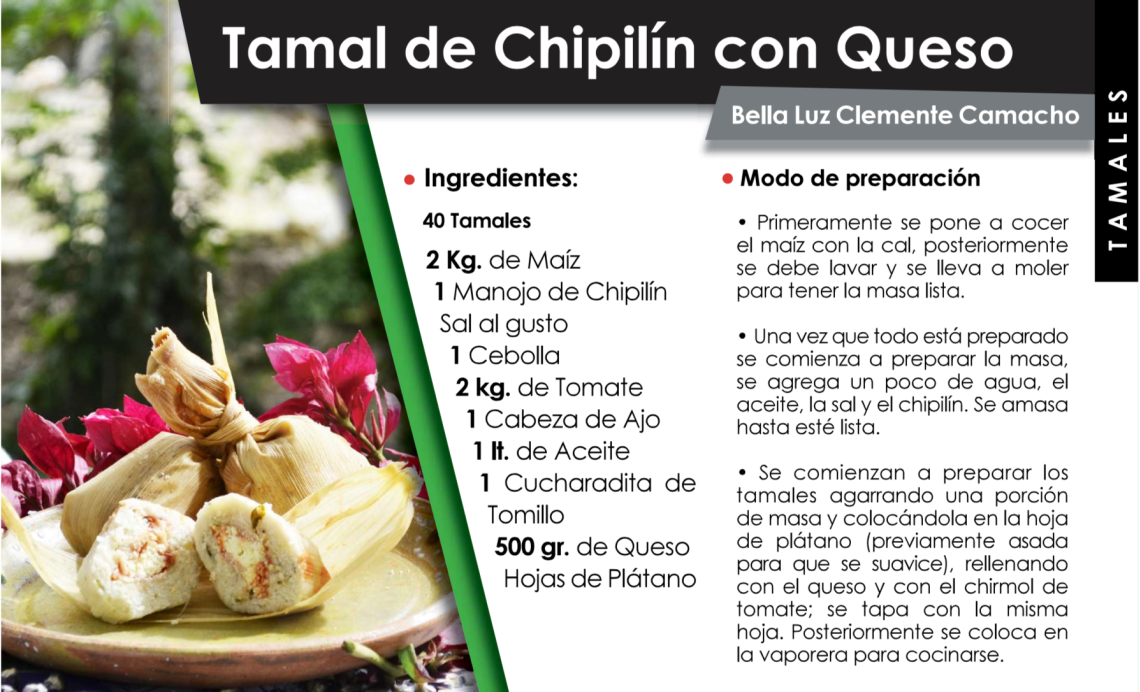 Recipe: Tamal with Chipilín and Cheese

The Courage to Change