Revival in the Mangroves

On this year’s World Mangrove Day, we reflect on the central role that mangrove forests play in the lives of coastal communities around the world.

Monique Lima, a marisqueira who participated in Rare’s 2015 Pride campaign in Capamena, her coastal Brazilian community in Resex Baía de Iguape, recently reached out to Rare to share the impact the campaign has had on her community, her family, and her future many years later. “The campaign changed our lives. Our income has improved, and we now know how to take care of our resources. I believe in a better future for us all. And today, I know things I never imagined I would.”

Monique was only 15 when Rare arrived with the Fish Forever program to support her mother and other female shellfishers improve the mangroves’ conservation. Now 21, Monique works alongside her mother to conserve the mangrove’s health and their profession. “Today, I am what I am thanks to the mangrove forests. I am very proud to be a marisqueira. To the youth or those who don’t believe in us, I say, ‘Never give up!’”

[The original story (below) was published in August 2017].

Elizabete “Bete” Soares learned to collect wild oysters from mangrove banks by watching her mother. At 35, she still does it the same way. Every morning from Monday to Friday, Soares goes to the banks alone or with only a few other shellfish collectors. She wraps her feet with boots made from the legs of old jeans and walks through thick, dark mud, sifting through it for oysters using a 10-centimeter iron rod connected to a stone. Once she feels something, she sticks an arm in the mud up to her elbow, searching, until her hand resurfaces, covered in grey-brown goop and holding a few shells. Though her basic gleaning methods haven’t changed, Bete Soares has noticed stark transformations to the health and productivity of the mangroves in Maragogipe, Brazil, where she and other local women work as shellfishers, or “marisqueiras.”

Soares says oyster numbers have fallen since her mother gleaned for them. “She could get about three kilos,” she says. “Today, there are tides where I cannot even get a pound of oyster. And the oysters are much smaller than in her time.” Marisqueiras and other local people link the drop in oyster stocks to increasingly unsustainable resource use and development activity in the area.

In 2015, a group of marisqueiras from the “maragogipano” communities of Capanema and Baixão do Guaí moved to drive a local movement for sustainable use — including their own use — of mangroves and marine resources. They teamed up with Daniel Andrade, a maragogipano who has worked to protect the mangroves since he was 17, to carry out a Rare Pride campaign for community adoption of sustainable wild shellfish management and local oyster aquaculture.

As the campaign progressed, Andrade watched the marisqueiras take ownership of their multiple identities as shellfishers, women and “quilombolas” (descendants of Afro-Brazilian slaves), and spearhead events. He’s found that after three years of opening up to changes in resource use and leading others to do the same, the marisqueiras are emerging with a stronger sense of pride in the aspects of an often messy and exhausting livelihood that used to bring them a tinge of shame — even the mud that puts a permanent brown line under their fingernails and clings to their clothes.

Maragogipe is a municipality near the Baía do Iguape Marine Extractive Reserve (RESEX) on the coast of Brazil’s Bahia state, where the estuaries of the rivers Guaí and Paraguaçu intersect. 19 maragogipano communities sit on the mangrove banks and rely on fisheries for jobs and food.
28-year-old marisqueira Vânia Pereira comes from a family of fishers and shellfishers in the Capanema community. She collects shellfish with her mother and sisters, and they and the generations before them have tried to minimize their impact on the environment. They aim to take only what they need, and only when the oysters have matured. “I can choose the size and amount of shellfish I want or need to survive, and leave others in the wild so other people can have them as well,” says Pereira. Not everyone shares her philosophy. She recalls seeing fishers come to Capanema with dynamite, taking out chunks of essential ecosystem for a quick catch. “They come in and place the bomb, they catch the fish that die on the spot, and leave,” she says.

I can choose the size and amount of shellfish I want or need to survive, and leave others in the wild so other people can have them as well.

Marisqueiras are also wary of companies developing around or within the Baía do Iguape RESEX, citing the Shipbuilding Industry Shipyard and the Pedra do Cavalo Hydroelectric Plant. Daniel Andrade says the shipyard has brought on a range of effects, like destroying big stretches of mangroves, altering tidal processes and water quality, wiping out marine biota, disrupting crustacean life with dredging, and catalyzing the erosion of riverbanks. He says the hydroelectric plant has changed the hydrodynamics of the Paraguaçu River, increasing the salinity of its waters. He links the changes to the disappearance of several types of fish and shellfish. Andrade also believes the plant is operating without permits from Brazilian environmental agencies.

Bete Soares is sure there is a connection between the recent development activity and the deterioration of local marine ecosystems. “They just say that the number of fishermen has grown, but after the companies settled here, the fish and the shellfish are gone,” she says. “I’m in the tide every day, I see what’s happening.” 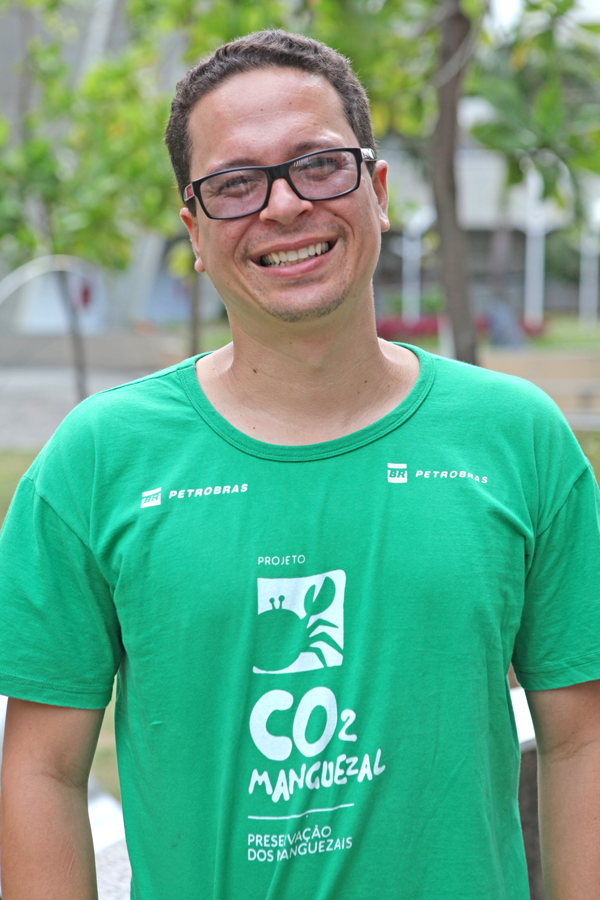 Daniel Andrade, born and raised in Maragogipe, has felt the need to protect the area’s mangroves since he was a teenager. When Andrade was 16 and ripe with a love for music (and a distaste for authority), he joined a band with his friends: “Vovó do Mangue,” or “Mangrove Grandma.” They used to skate, make rock music and write fanzines, he says, but they also felt compelled to give back. So they started a local food collection campaign. “With these visits to the communities, we saw the degradation that happened to the mangroves, because most of the poorest villages of Maragogipe are on the edge of the mangroves,” Andrade says. “We saw how people cut down the mangroves, a lot of trash, sewage, and everything that degrades the ecosystem.”

Andrade and his friends responded by creating the Vovó do Mangue Foundation in 1997. “At that time, I was 17 years old and it was my first conservation effort, even before the RESEX was created [in Baía do Iguape],” he says. Serving as the foundation’s director, he connected Vovó do Mangue and its work with Rare in Brazil in 2015, when he became a Pride campaign manager.

Rare Pride campaigns are designed to build buy-in for practices that encourage conservation and environmental and economic sustainability in fishing communities. In Maragogipe, the Pride campaign’s target behaviors included compliance with the government’s RESEX Management Agreement (which stipulates that shellfish collectors avoid capturing and selling oysters smaller than five centimeters in size in order to protect the breeding cycle) and the establishment of local oyster aquaculture as a safeguard against pressure on wild oyster populations.

The marisqueiras worked with Andrade to create and carry out the Pride campaign from start to finish, and “nothing was written or put into practice without their opinion and decision,” he says. The campaign hosted educational activities and monthly meetings within the communities. Researchers and university students came to conduct monthly visits and accompany the marisqueiras to the mangroves to learn more about their conditions. Andrade and his team also brought in staff from Bahia Pesca (the Bahian fisheries agency) for technical visits. “We were lucky to find people and partners who believed in the project,” he says. “But more important than the campaign’s activities were informal conversations, voluntary weekend visits, meeting the shellfish workers’ families, participating in some form of their lives, and letting them participate in mine as well. Today I can say that I became a member of the communities.”

But trust wasn’t always easy to come by, says Andrade. Marigogipe is home to Quilombola communities, meaning their people are descendants of Afro-Brazilian slaves that once escaped from slave plantations (in place in Brazil until 1888).  “It is a characteristic of quilombola communities to be very closed and distrustful of outsiders, because it is very common to see people and projects that promise a thousand things, use communities, and then fall out,” he says.

“So the campaign began, literally, with knocking on doors of community leaders, then holding meetings and attending RESEX and Quilombola Council meetings,” says Andrade. “There was a whole process of building trust, and gradually they realized it was a different proposal.” The campaign slogan recognized the marisqueiras’ quilombola roots: “Marisqueira com orgulho, quilombola para sempre,” or “Female shellfish collectors with pride, Afrodescendants forever.” The marisqueiras also moved to create a local association, the “Association of Marisqueiras and Quilombolas,” or the “Mariquilombo” association. “Cultivation and new projects can be monitored and managed by them, since they occupy 100 percent of the board,” says Andrade.

The campaign began, literally, with knocking on doors of community leaders, then holding meetings and attending Resex and Quilombola Council meetings. There was a whole process of building trust.

The marisqueiras studied oyster farming for the aquaculture project during trips to the Bahian communities of Kaonge and Dendê, where oyster aquaculture has been a norm for more than 15 years. During the campaign, they found partners to help raise the funds needed to buy oyster aquaculture equipment. Two cells of a community oyster culture were then installed, one in Capanema and another in Baixão do Guaí. The marisqueiras developed criteria to select 30 families of shellfish farmers to manage the oyster farms. They set up the project to use structures made of bamboo, seed collectors produced with recycled PET bottles (plastic bottles, mostly soda or water bottles), and operate by way of shared management within the communities.

Now, as the farmed oysters grow in their shells, the marisqueiras use their years of shellfishing experience and familiarity with the species to harvest them. “They call me and send happy videos for each new achievement, like when they took more than a thousand oyster seeds from the collectors,” says Andrade. “They already know how to handle the crop, they already know when and how to clean the oysters, change the pillows, and remove the seeds. They already dominate all the steps and do everything by themselves.” Combined, the Capanema and Baixão do Guaí crops have produced around 1,400 sets of ready-to-market oysters by the dozen, and the marisqueiras are preparing to carry out their first commercialization of the cultivated oysters.

This year, the oyster aquaculture project won the marisqueiras the country’s Women’s Consulate Award and a R$10,000 prize, which will be used to purchase the land on which the Mariquilombo association headquarters will be built. The marisqueiras are hoping to eventually build a semi-industrial kitchen at the office, where they can make breads, cookies, biscuits and cassava products for an alternative source of income.

Andrade says the marisqueiras’ work has empowered them to find more ways to better their livelihood. They’ve used funds raised during the campaign to buy legionary caps, neoprene boots, and sun protective shirts to wear while gleaning. They’re now selling their oysters by the dozen rather than individually, and have begun negotiating prices for their catch with end customers rather than middlemen. “They feel more confident and proud of what they do,” says Andrade. “Many are no longer afraid or ashamed of public speaking or exposing their opinions.” Andrade aims to help them continue to drive positive change, for their communities and for themselves. “I intend to continue to advise them even after the end of Rare’s partnership with the Vovó do Mangue Foundation, until they can walk alone,” he says. “This is my responsibility.”