Iriona, Honduras — The mayors of Iriona and Limón and their coastal fishing communities have long felt despondent. For years, they have battled the industrial fishing fleets and trawlers encroaching on their municipalities’ coastal waters, and the 2017 national fisheries law that eliminated exclusive fishing areas for coastal fishers three nautical miles from shore made everything worse. The law enabled increased competition for limited resources and guaranteed industrial incursions in near-shore waters.  The small-scale fishers in these two municipalities along Honduras’s Caribbean coast have struggled to compete with the big trawlers for fish catch and to catch enough to sustain and feed their families.

But in March, good news hit the shore. The Institute for Forestry Conservation (ICF)—the Honduran institute in charge of protected areas— declared Honduras’s first and largest community-based ‘managed access’ area in coastal waters and designated it a “Site of Importance for Wildlife.”

This new managed area, which gives small-scale fishers exclusive access to fish, encompasses 1,453 km2 of coastal waters in the Iriona and Limón municipalities—an area bigger than Los Angeles, California.  It also underpins the livelihoods and food security of over 300 small-scale fishers across eight coastal communities.

“This historic declaration is an incredible breakthrough for coastal fishing communities throughout Honduras,” said Diana Vásquez, Vice President of Rare’s Fish Forever program in the Mesoamerican Reef region. “It empowers the coastal communities who rely on these waters and charts a course for community-based fisheries management across the region.” 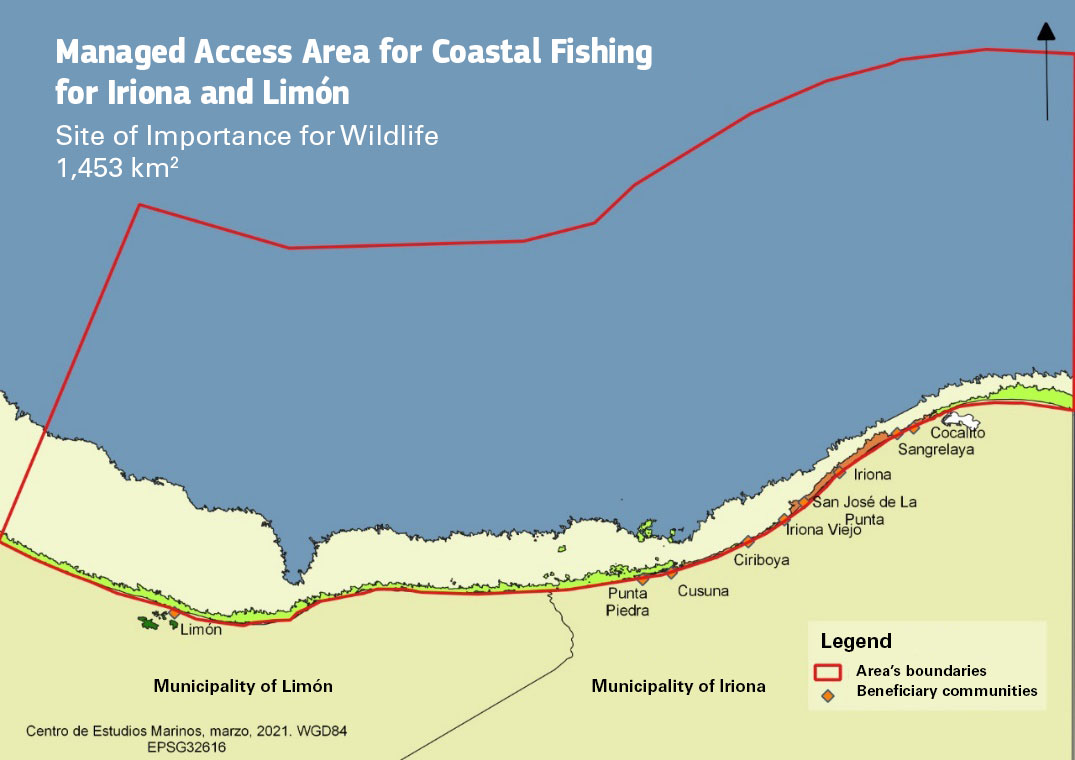 Over time, Rare’s partnerships with the local, regional, and national government, local NGOs like the Center for Marine Studies, and a remarkable group of community leaders and champion mayors, like Iriona’s Wilmer Guzmán and Limón’s Jorge Martinez, have cleared a legal pathway.

“Together, we need to protect and manage our coastal resources more than ever,” said Mayor Guzmán. “The fishers and their families depend on them.”

Since 2019, Mayor Guzmán and 15 mayors from coastal communities across Honduras’s north coast and Bay Islands have publicly pledged to support healthy and sustainable fishing communities as part of the Global Leaders Network. Through this network, local leaders like Mayor Guzmán commit to reforming coastal fisheries and protecting and stewarding coastal marine areas.  “The declaration is a powerful example of how local and national government commitments translate into actions that give priority and preference to small-scale fisheries and promote a blue recovery, “said Steve Box, Managing Director of Rare’s global Fish Forever program.

Over two million people across the region depend directly on the Mesoamerican Reef’s 600 miles of essential marine habitat stretching across the Caribbean coasts of Mexico, Belize, Guatemala, and Honduras. Community-based fisheries support the coastal communities’ local economies and significantly contribute to national fisheries production and food security. In Honduras alone, the artisanal fisheries sector’s value and catches have surpassed those of its industrial counterpart for decades.

In the MAR, Fish Forever aims to place 17,000 km2 of Honduras and Guatemala’s seascape under effective management. “We expect that this declaration will set a precedent for rapidly accelerating declarations across other municipalities,” said Diana Vásquez.

In Iriona and Limón, Fish Forever plans to transform this first managed access area into a proof point for the region and work with communities and partners like CEM and Mayor Guzmán to establish no-take marine reserve networks, fishing regulations, and a community-led management body.

“We have a renewed sense of hope for our coastal fishing families,” said Iriona fishing leader Charles Castillo. “The future now looks brighter.”

To Protect the Mesoamerican Reef, Honduran Mayors Commit to...