This week, Rare and University of Santa Barbara professor Christopher Costello discussed the critical link between sustainable fisheries management and climate resilience. Costello’s central point: if communities can get their fisheries sustainably managed — and thus more responsive to changes in the environment — they’ll be better equipped to deal with climate change. For coastal communities like those on Brazil’s coast, that advice is paramount — they’re extremely reliant on small-scale fishing for livelihood, extremely vulnerable to climate change, and their fisheries have historically been mismanaged. Rare’s work revolves around helping such communities unite around sustainable management, and get it off the ground. Here’s what Rare is doing to drive community adoption of new management in Brazil. 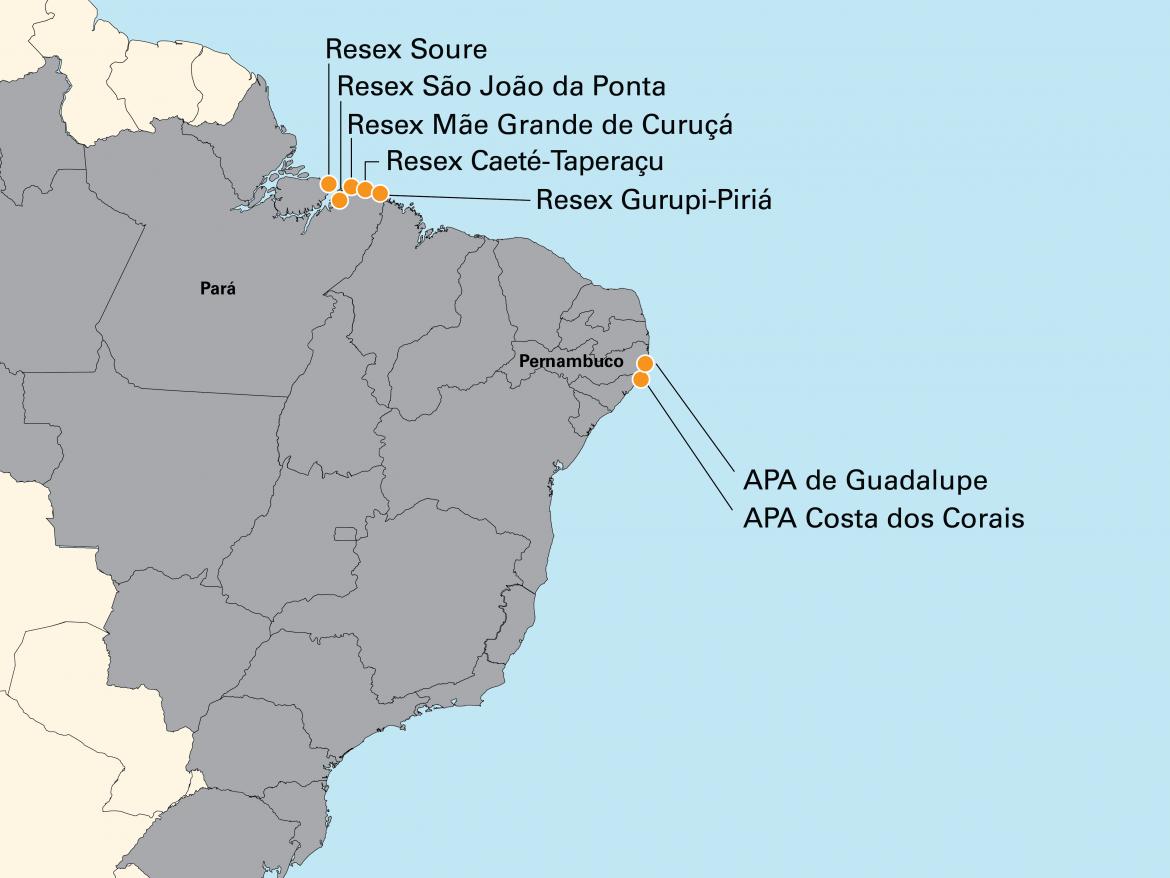 In March 2017, Rare’s Brazilian fisheries program launched seven new sites in Pará and Pernambuco, home to 40 communities along the coast. As in its first Brazilian sites, Rare will work in these areas to create local support for an eco-conscious, rights-based fisheries management approach that the organization promotes in coastal communities around the world. Using the approach, communities in two of Brazil’s 17 coastal states can sustainably manage their fishing within several of the vast, scattered and beautiful marine protected areas in Brazil’s waters.

In its first six sites — Cururupu, Delta do Parnaiba, Prainha do Canto Verde, Baía do Iguape, Canavieiras and Pirajubaé — Rare worked with 11 communities all over the coast to show small-scale fishers a locally-powered management approach that could work with the country’s existing marine protected areas (MPAs). More specifically, Rare worked with the RESEX system of marine extractive reserves, among which communities live and fish. In a RESEX, these communities hold primary power over decision-making: within the area’s management council, which discusses and votes on new regulations and other actions, communities have 51 percent of the voting power. Rare adapts MPAs for use in “managed access + reserves,” an approach that acts as an alternative to open-access fishing by organizing local use of coastal fisheries based on exclusive rights to delineated access areas. The approach combines managed access with reserves, incentivizing participating fishers to uphold MPA protections. In the pairing, managed access + marine reserve areas take on sustainability and marine conservation in a single effort.

This year, Rare continues to team up with local partners to foster community adoption of sustainable fishing behavior. Rare trains local leaders from fishing communities to lead a Pride campaign in each site, designed to channel behavioral science insights to build local buy-in for managed access + reserves and support their implementation. With the new sites, Rare and its partners will reach about four times as many fishers, communities and people as the first group of sites. Rare is also doubling the area where new fisheries management will potentially apply: the new sites collectively deal with an area that stretches out over more than 1,600,000 acres of ocean. Rare aims to bring 334,000 acres of that large tract under sustainable management.

To hit those numbers, Rare in Brazil is focusing on the potential of entire states to enact sweeping changes for their communities. The organization has geographically clustered the new sites to build a kind of critical mass of support among communities within each state. This year, Rare is extending its program to Pará and Pernambuco — two states with powerful potential for transforming small-scale fishing on their coasts.

For Pará’s state government, finding a workable management solution has become a top priority, given its ties to the sector. Pará is Brazil’s largest producer of fish from small-scale fisheries, the second-largest producer of total seafood in the country, and its population is more dependent on small-scale fisheries than any other Brazilian state. Pará has incorporated sustainable small-scale fishing into its development agenda, and its government will provide some financial and logistical support to Rare’s work there. Rare and the UN Food and Agriculture Organization (FAO) have also established a partnership to promote sustainable fisheries in Pará as a case study to be potentially replicated elsewhere in Brazil, following the principles of FAO’s Small-Scale Fisheries Guidelines.

In Pernambuco, an influential scientific community has expressed the same openness to shifting fisheries management. At the Federal University of Pernambuco, for instance, leading scientists Dr. Beatrice Padovani and Dr. Mauro Maida have researched conservation and fisheries management for 20 years, and are responsible for establishing the sole successful marine no-take zone in Brazil. Rare will be teaming up with the scientists and other local scientific institutions to implement sustainable use in Pernambuco’s protected waters.

In addition to local partners, Rare will continue to work with its ongoing national partners, CONFREM (the National Commission for Strengthening of Marine Extractive Reserves which represents the interest of small-scale fishers in the country) and ICMBio (the Chico Mendes Institute for Biodiversity Conservation, responsible for the creation and management of protected areas in Brazil), and international ocean conservation organization Oceana, Rare’s partner under Bloomberg Philanthropies’ Vibrant Oceans Initiative. Rare’s blend of partnerships with local organizations, state governments, and national agencies will be critical to wider adoption of managed access + reserves.